Fire and Explosion in Oil & Gas Industries and Related Q&As

1. Basics of fires
2. Factors and causes of fire
3. How can we reduce the risk of fire
4. Fire tetrahedron
5. Questions and answers

The major cause of accident in oil & gas industries is due to fire. There are many flammable & inflammable fluids & solids present in the oil & gas plant which ignites to cause fire.

Let us discuss the factors & causes of fire.

Factors and causes of fire in oil and gas industries-

The concept of fire can be well understood and explained using a simple model called the Fire Triangle. As seen in the fire triangle the three factors contributing to cause a fire are: Fuel, Oxidizing agent (Oxygen) & Heat. A fire is caused if all the three factors are present in mixture in the required concentration. Reverse is true for stopping the fire to happen i.e.if any one of the factor is eliminated or the concentration of any one can be kept below the required level then fire can be eliminated. 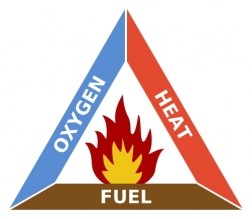 How can we reduce the risk of fire?

Typical cases where fuel occurs are – if there is a leak, during filling operations, transfer operations, or excessive dusts. 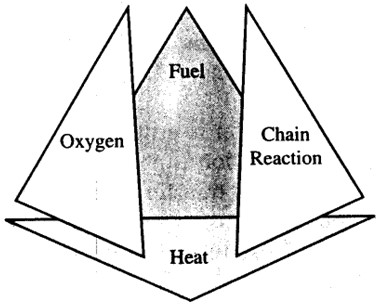 Water is one of most important fire retardant agent as it keeps the temperature of the fuel below its ignition point. Similarly foam prevents the required oxygen level for fire to happen.

Que: What is the flash point of a liquid?
Ans.  Flash point is the lowest temperature at which a liquid exposed to the air gives off sufficient vapor to form a flammable mixture, or within the apparatus used, that can be ignited by a suitable flame.  More precisely, it is the temperature of a liquid at which the partial pressure of its vapor reaches the lower flammable limit when the liquid is heated in air.

Que: What is the fundamental difference between flammable and combustible stock?
Ans.  Flammable stock is capable of being ignited without having to be heated.  Combustible material must be heated by some external source in order to be capable of burning.

Que: What is the difference between the terms “lower explosive limit (LEL)” and “lower flammable limit (LFL)”?
Ans.  None.  The terms are synonymous.

Que: A material whose flash point is 212oF (100oC) is being stored at 203oF (95oC).  Is this treated as a      flammable or combustible material under ExxonMobil practices?
Ans.  Flammable (Stored within 15oF (10oC) of its flash point.

Que: A pipe whose surface temperature is 662oF (350oC) represents a likely source of ignition for a flammable vapor whose autoignition temperature (A.I.T.) is 608oF (320oC). (True/False).
Ans.  False.  In order to be a source of ignition in open air, a hot line would have to be at least 220oF (105oC) higher than the AIT.  This has been found by experiment.  Apparently, natural convection prevents the vapor from remaining in contact with the pipe long enough to cause ignition.

Que: Pressure has a significant effect on the flammable range of most hydrocarbons. (True/False).
Ans.  True.  Flammable range widens with increasing pressure.

Que: The only factors that determine the strength of a vapor cloud explosion are the type of molecule and the amount released.  (True/False)
Ans.  False.  Other factors are confinement, weather, and source consideration.

Que: The TNT model is still the best for modeling                 explosions.  (True/False)
Ans.  False.  Although explosions are still reported as “tons of TNT equivalent”, the Multi-Energy Model is more accurate in most cases.