Classification of Pipe Supports Based on Details, Constructions and Functions

Broadly the pipe supports are classified in three groups as per following details / functions:

These are described below in brief.

As per this general detail the support is classified as:

It is the parts of support assembly which is directly connected to the pipe.

It is the parts of support assembly which is directly connected to the foundation / structure and is supporting the primary support attached to the pipe line.

2. Pipe Supports Classification as per Construction:

Based on construction details, pipe supports are broadly classified in three types, as

These are described below in brief.

This type of support arrangement is generally very simple and has maximum use in piping. It does not have adjustability to the erection tolerances. It will directly rest on foundation or structure which is supporting the pipe. Common type of RIGID SUPPORTS are shoe type (welded), shoe type (with clamp) Trunnion type, valve holder type, support brackets (Secondary Support). These are described under the topic ‘Supports Generally used’.

This type of support is commonly used for supporting hot piping. It shall be able to support pipes even when the pipe is moving up or down at support point.

This type of support is Rigid type in construction but is has few nuts and bolts arrangements for adjusting the supports with respect to the actual erected condition of pipe. The support can be adjusted for the erection tolerances in the piping. These are required for a better supporting need at critical locations of pipe supports.

Mostly all type of rigid supports can be modified by using certain type of nuts and bolts arrangement, to make it as an Adjustable support.

Only a typical type of adjustable support is described under the topic ‘Supports Generally used.’ 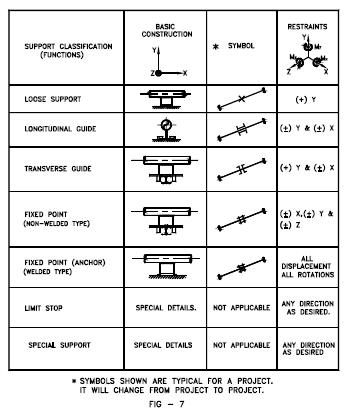 Pipe support classification as per function.
This may change based on project.

Pipe supports classified as per functions are summarized in the Table at FIG.7. These are shown along with its basic construction, the symbols generally used and type of restraints it offers to the piping system.

The supports classified as per function are further described as follows:

This is most commonly used support meant for supporting only the pipe weight vertically. It allows pipe to move in axial as well as transverse direction but restricts only the vertical downward movement.

This type of support is used to restrict the movement of pipe in transverse direction i.e. perpendicular to length of pipe but allow movement in longitudinal direction. This is also a commonly used type of support. Generally it is used along with Loose support.

This type of support is used to restrict the movement of pipe in longitudinal (axial) direction but allows the pipe to move in transverse direction. This is also referred as ‘AXIAL STOP’. This type is less used as compared to above two types. Generally it is used along with Loose support.

This can be considered as a combination of longitudinal and transverse guide. This type resists only the linear movements in all directions but not the rotational movements. This avoids heavy loading of support as well as pipe. Therefore this type of support is preferred over welded type.

As name itself indicates it allows pipe movement freely upto a certain limit and restricts any further movement. This is useful when total stops causes excessive loading on piping and support or nozzle.

This type of support should be used selectively, because of stringent and complicated requirements of design, erection and operation.

When we need a pipe support whose construction or functional details are different from the available details, then a special support detail sketch is prepared. The functions of this support can be any combination of above functions.