A gas compressor is a mechanical device that increases the pressure of a gas by reducing its volume.

Compressors are prime movers of gas and air in process industries. They are used to increase static pressure of the gas and deliver it at specified pressure and flow rate in a process application.

Compressors are similar to pumps, both increase the pressure on a fluid and both can transport the fluid through a pipe. As gases are compressible, the compressor also reduces the volume of gas. Liquids are relatively incompressible, so the main action of a pump is to transport liquids

As shown in chart below, compressors fall into two separate and distinct categories: Dynamic and Positive displacement. 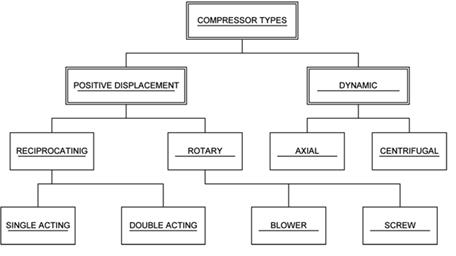 In all positive displacement machines, a certain inlet volume of gas is confined in a given space and subsequently compressed by reducing this confined space or volume. At this elevated pressure, the gas is next expelled into the discharge piping or vessel system.

Although positive displacement compressors include a wide spectrum of configurations and geometries, the most important process machines are piston compressors and helical screw rotating machines. Although there are a number of others, including diaphragm and sliding vane compressors, the overwhelming majority of significant process gas-positive displacement machines are clearly reciprocating piston and twin helical screw-rotating or rotary screw machines.

The reciprocating or piston compressor is a positive displacement compressor that uses the movement of a piston within a cylinder to move gas from one pressure level to another (higher) pressure level.

Reciprocating compressors types include the following:

b)    Multi-cylinder- Some reciprocating compressors can have up to six cylinders. Pistons connected to crankshaft are utilized to compress the gas.

c)    Multi-stage design- Multi stage compression stages take the vapour and compress it several times in a series of compression cylinders in order to increase the pressure. 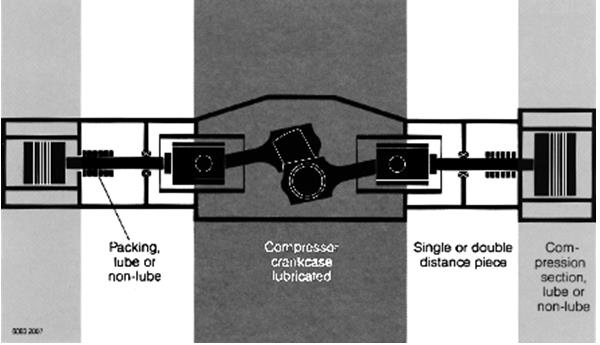 The screw compressor is a positive displacement machine and as such has distinct working phases: suction, compression and discharge. Two counter rotating helical screws are arranged in a compressor casing; gas inlet and discharge nozzles are at opposite ends. 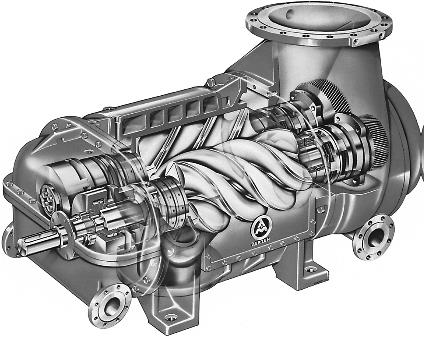 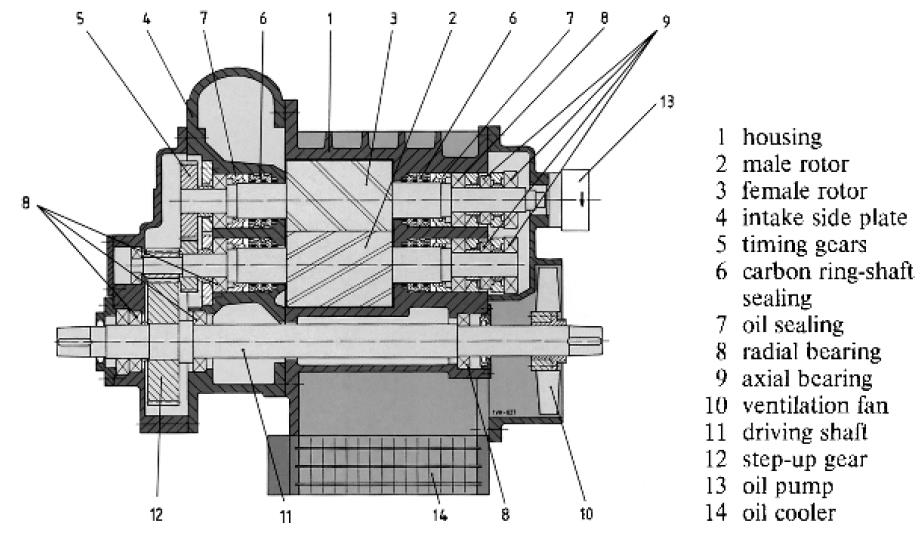 The centrifugal compressor is a dynamic machine that achieves compression by applying inertial forces to the gas (acceleration, deceleration, and turning) by means of rotating impellers. The centrifugal compressor is made up of one (single stage) or more stages (multi-stage), each stage consisting of an impeller and a diffuser. The impeller is the rotating element and the diffuser is the stationary element.

Both single and multistage machines are generally made up of standardized components.

There are two principal casing types:

Horizontally split casing design – Multiple impellers are attached to a single rotating shaft, for a multi-stage structure. The gas enters through the intake nozzle, and is compressed stage and pressurized by centrifugal force as it passes through the impellers, which are rotating at high speed, before being ejected through the ejection nozzle. With this type of compressor, the outer casing can be split in the horizontal direction, facilitating the maintenance of internal parts. The red parts are the critical shaft and impellers. The photos below show magnified views of the impeller. 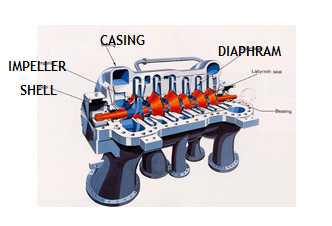 These are used when the working pressure and type of gas demand such an arrangement.

All internal parts are similar to the horizontally split type casing, but the diaphragm seals and the rotor bundle are inserted axially in a forged steel barrel casing. Ends are closed with end covers, the lower half of the bearing housing is integral with the end cover. By removing the end cover, it is possible to withdraw the complete internal assembly and have access to the internals like seals, diaphragms and rotor.

The nozzle configurations can be selected over a wide range. Centrifugal compressors are generally suitable for high flow requirements.

A Turboexpander, also referred to as an expansion turbine, is a centrifugal or axial, flow turbine through which a high pressure gas is expanded to produce work that is used to drive a compressor.

The term “Turboexpander”, as shown in figure below, is normally used to define an Expander/Compressor machine as a single unit. It consists of two primary components; the

Radial Inflow Expansion Turbine and a Centrifugal (Booster) Compressor combined as an assembly. Its wheels are connected on a single Shaft. The expansion turbine is the power unit and the Compressor is the driven unit.

In a Gas Processing Plant, the purpose of the Turboexpander is to efficiently perform two distinctly different, but complimentary, functions in a single machine. The primary function is to efficiently generate refrigeration in the process gas stream. This is done at the Expansion Turbine end by efficiently extracting the potential heat energy from the gas stream, causing it to cool dramatically. This extracted energy is converted to mechanical energy to rotate the Shaft of the Booster Compressor end of the Turboexpander, which partially recompresses the residue gas stream. Figure below shows a turbo expander compressor set. 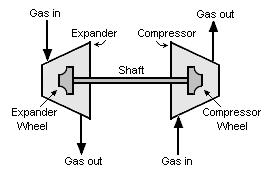